How about building President Trump’s controversial border wall with solar panels and in Mexico? Taking on a controversial and politicized issue can be an opportunity for generating "win-win", non-zero sum alternatives.

Our Innovation Lab experts discussed that concept a month ago and published it in www.piiblog.org The "concept" is now officially mainstream, with an article published today in the Wall Street Journal, by Vasilis Fthenakis, director of the Center for Life Analysis at Columbia University and Ken Zweibel, Director of the Solar Institute at George Washington University.

The idea of a solar wall combines two apparently antagonistic ideas in a mutually beneficial combination. Solar, renewable energy can power and stimulate economic growth in border towns and regions in the United States and Mexico at a fraction of the cost of a conventional wall (more so if built in Mexico, the WSJ article argues).

From a border-securing perspective, although solar panels are not natural barriers, they might get protection and attention from power companies in addition to border patrols in otherwise low-populated, inhospitable areas of the border.

Electronic surveillance -a more effective and already proven method for controlling borders- would be easier to sustain and power, since it is a common feature in solar power facilities. Tech jobs for maintenance and control would follow,

Technically feasible, the wall would add economies of scale to the energy alternatives and turn a political "third rail" of both countries into an area of possible international and local cooperation.

Thinking "outside of the box" is easier if working in a "sand box" like the Performance Improvement Institute, where entrepreneurs, investors and experts have been working across borders for more than a decade.

The Arizona-Sonora mega region (Arison) is already a reality, with universities and governments in both countries cooperating within the framework of existing agreements. The region is building on the trust developed by more than 30 successful startups incubated by the Performance Improvement Institute and growing in the Yaqui Valley ecosystem.

Perhaps it is time to move this idea from the sandbox into practice and try to work on a joint project. 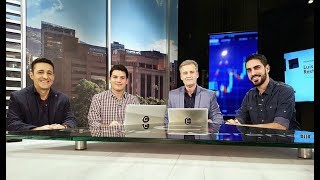